Patients should have a right to record their medical conversations.
Everyone benefits when it’s clear what a doctor told a patient.

Sign the petition to give patients the right to record if you’re a resident of California, Connecticut, Florida, Illinois, Maryland, Massachusetts, Montana, New Hampshire, Oregon, Pennsylvania or Washington.

Add your email to stay updated.
Thank you! Your submission has been received!
Oops! Something went wrong while submitting the form. 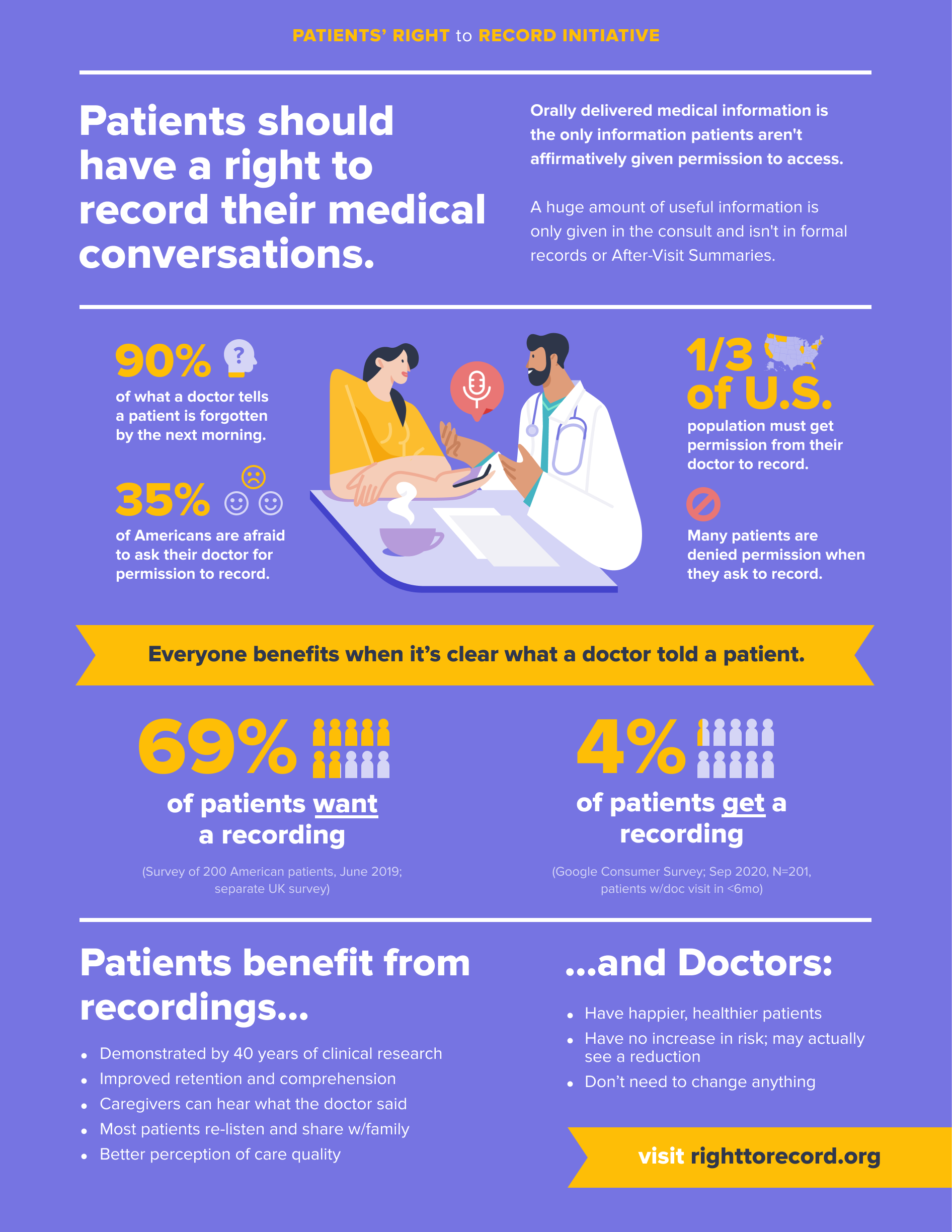 About the Patients’ Right to Record Initiative

Patients don’t have a right to record today.

Patients already have an affirmative right to access information concerning their medical tests, records, and condition given to them by the Health Insurance Portability and Accountability Act. Anything in their medical record they have the legal right to be able to access for their records and review. But there’s a critical hole in their records - the content of the actual conversations they have with their doctor. And as anyone who has gotten a complex disease knows, there is a tremendous amount of information shared orally in the consult that is not in an after-visit summary, discharge notes, or the medical record.

David Weekly, the founder of Right To Record, dealt with his mother’s lung cancer, after which she shortly passed. Shortly after, his brother got advanced brain cancer, which he has miraculously survived. Then his father got a particularly aggressive form of prostate cancer and he passed in 2018. David’s family got a front row seat on how patients receive care in this country. It blew us away to see how much critical information was spoken by a doctor but not written down anywhere. That’s why we started this initiative. Many patients are uncertain if they can record their what they are being told about their health and their bodies and deserve to understand their doctors.

Without a recording or note-taking assistance, patients remember very little of the information they are told by doctors; one estimate is that 90% of the information is forgotten by the next morning. This leads to very low patient comprehension, retention, and compliance rates, which in turn leads to poor patient outcomes. To a degree, this shouldn’t be surprising - the doctor is telling a patient things precisely because they are important! Patients also struggle to relate to their loved ones everything their doctors said. This makes it difficult for a patient’s “at home care team” to fully support them.

There is also over 40 years of clinical evidence that patients given a recording of their consultation listen to it and share it with family. They’re also more likely to positively review the quality of care received from their doctor and to have increased retention and compliance. Poor medication adherence has been demonstrated to significantly harm patient outcomes. Patients can also get better support from caretakers when those caretakers can hear what the doctor had to say in the doctor’s own words, improving social determinants of health.

Americans want recordings of their consults.

The desire to understand one’s doctor is not a niche desire. 69% of people polled in the US (Medcorder Google Consumer Survey, US Patients, N=201) and 69% of those polled in the UK (Elwyn 2015) would find it useful to have a recording of their medical consultations.

A lack of a right to record is hurting patients.

Only a tiny fraction of patients get a recording of their medical visit today. This means that for the vast majority of Americans, they have to perform the recording themselves. Recording of speech is regulated by state wiretapping laws; 11 of the 50 states are so-called “two party consent” states that require everyone whose speech is being recorded to consent to the recording of their speech - in those states, the patient must legally ask permission from the doctor to record the consult. 35% of Americans are too scared to ask their doctor for permission to record. When asked, some doctors refuse to allow patients to record, and we’ve even gotten a few reports of patients being “fired” by their doctors for having the audacity to request a recording. These stories further discourage patients from asking permission to record. Making things worse, new COVID-19 policies mean that patients can’t have someone come with them to take notes or record.

Doctors are not harmed by recordings.

While many doctors today may resist having their conversations recorded, the primary reason doctors give when refusing to allow patients to record comes from a concern about these recordings being used against them in a malpractice suit. But evidence from malpractice insurers themselves indicate that recordings may exonerate more often than they incriminate; the Barrows Neurological Clinic in Phoenix, Arizona saw a significant decrease in their malpractice premiums after systematically recording all doctor-patient consults. Several studies involving banks of lawyers reviewing over 100 clinical recordings found no increased liability risk present in the content of these recordings. Finally, in a survey of several dozen care systems, we found every one of them left the decision about whether a doctor-patient conversation could be recorded up to the individual physician -- but provided physicians no guidance about when to approve or deny such recordings. Absent clear regulatory or policy guidance, doctors understandably take a conservative stance around approving patient recordings, leading to a preservation of the status quo. That needs to change.

Many doctors are already recording.

Remote scribing and automated scribing solutions from companies like Augmedix, Nuance, AutoScribe, and Deepscribe are growing in physician use, as well as voice-augmented solutions in the exam room such as by Robin Health, Suki, and Notable Health. Physicians have a right to benefit from tools that capture a clear and unambiguous record of what was communicated to a patient; patients deserve this, too. When doctors ask patients to record a conversation, more than 98% of patients agree.

Proposal: Give patients an affirmative right to record.

It’s important to recognize how much critical information about a patient’s condition and treatment is present in a oral conversation they have with their doctor.

Email us with questions or to get involved.